Greens & Lemons, located at 2707 E Griffin Pkwy in Mission, may look like your average Valley eatery – it’s not. In fact, it is just the opposite.

What sets Green & Lemons apart is their variety of vegan and vegetarian options that we just aren’t accustomed to seeing in the area. Their motto is simple, but true – “Be happy, be healthy, and eat real food.”

I had eaten at places similar to this, like The Green Owl in McAllen (which also has its own review).

Greens & Lemons serves great, super fresh food including Mediterranean cuisine, salads, ceviche, smoothies, juices, sandwiches, vegan items, and amazing dishes from different regions of Mexico. The eatery boast a very relaxed atmosphere, and the servers who took care of us were extremely friendly, and very knowledgeable about everything on the menu.

My first entrée choice was one I had wanted to try for a while, a dish that relied heavily on alternative protein choices like black beans and quinoa. Even with so much information available to us, most people still view protein simply as beef, chicken, and fish. This is not the case.

I offer you exhibit A – Monks Bowl. 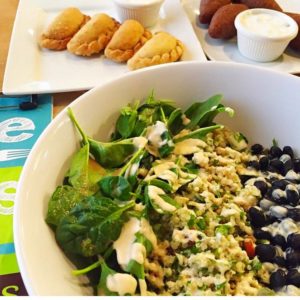 A simple dish with spinach, black beans, quinoa tabbouleh, and a touch of vegan spicy mayo with balsamic. Black beans are the base for the dish and replace the traditional proteins (chicken, beef, or fish). The quinoa tabbouleh provided succulent flavor to the dish.

Tabbouleh is a type of salad mixed with cracked wheat, chopped ingredients such as tomatoes or onions, and parsley. The taste reminded me very much of pico de gallo. Last, but not least, was the spinach served with balsamic, which gave the plate a delectable little kick. This made for one equally healthy and satisfying meal. 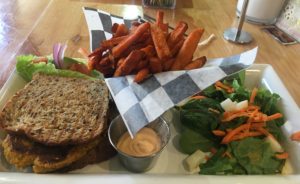 The Quinoa Burger was my other entrée choice, and it quickly made its way to a top position on the list of best burgers I had ever tried. Quinoa burgers can be made with a variety of ingredients including quinoa, bread crumbs, bell peppers, onions, garlic, cumin, salt, hot pepper sauce, and even black beans as well.

While this particular burger did not have black beans, it definitely didn’t take anything away from the dish. The first notable difference biting into the burger was the texture. While beef or chicken burgers can be a bit tough because of their texture, the quinoa burger was quite soft, but still full of scrumptious flavor. Another awesome treat is that you can choose from a variety of breads for your burger. I chose to go with the Ezekiel bread. The burger was also served with sweet potato fries, which were perfectly crisp, as well as a side salad that wonderfully complemented the entire meal.

If you are really considering what it is that you are eating in 2017, and want to try something new and appetizing, then Greens & Lemons might be the place for you.

4.7/5
The domain RGV.comᵀᴹ is for sale (or lease)
Click here for details ➜
This is default text for notification bar
Learn more