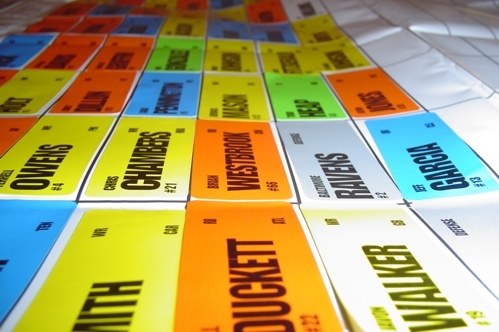 “Are you ready for some football?! Some Monday night (and Thursday night and Sunday all day) football!”

Yes indeed. The season is upon us once again. We’re talking hard-hitting, bone-breaking, ball-deflating, Kaepernick-refusing-to-stand-for-the-pledge, real American football. And even though I’m not a yuge fan, it’s still a nice excuse for me to get out of the house, have a few beers, and eat some good ‘ol Texas barbeque with the fellas.

The only problem is that they keep asking me to join their fantasy football leagues. Which, I must admit, I have no interest in doing. So yeah…maybe I’m not a real real fan of the sport, but I like to believe I can still enjoy watching the game without knowing every single player on a team’s roster or every quarterbacks’ pass attempts per game stats in high school.

So in honor of all those who just want to watch a game without having to dedicate 20 hours a week trying to figure out who’s going to make the roster for their FANTASY team, here are my 7 reasons why I don’t play fantasy football.

I know myself. And I don’t know the game. Sure, I recognize some of the bigger names. I’ll keep an eye on who’s leading in each division. I’ll even catch 2 or 3 games on Sunday. But that’s the extent of my football knowledge. I am merely a visitor in the land of football. Hence, I’m not going to let my friend (or coworker) sucker me in to paying $50 to play in a league where there’s a 99.9% chance I’m going to lose.

As the years have passed, I’ve found myself a little more drawn into the football realm. Because I like to consider myself an avid sports watcher, I want to be able to understand the game a little better – just to show some more appreciation if anything. But in no way am I ready to dedicate my free time to studying player stats and turning myself into a virtual Jerry Jones. Sorry fantasy football…it isn’t you…it’s me.

No, this isn’t just like number one. Because not only do I not want to pay to lose. I also don’t want to lose. I mean…how is that any fun? If I’m going to participate in something, I’d like to think I at least have a chance at winning a few games. C’mon throw me a bone here. But sadly, I’m confident in saying, I’d get demolished in fantasy football. I know I need a quarterback, receiver, and running back and…coach? Yeah…I don’t like losing.

#4. Because I just want to watch the game.

Literally. I just want to watch the game. I don’t want to have to think how this affecting my “real life” fantasy football team. As a matter of fact. I don’t want to have to think. Sunday football (…or Monday or Thursday…take your pick…) is the perfect time to just light the grill, throw some burgers on the pit, and not have to worry about how you’re losing cash on a game. Ain’t nobody got time for that.

If I were to join a fantasy football league, it would probably be with a group of friends. Because I am extremely comfortable talking smack to said friends, I’m pretty sure I would attempt to play mind games by upping the smack talking ante. This would likely lead to some gentlemanly disagreements and perhaps some heated discussions. Do I need to trash talk? No. Is it fun? Oh yeah. Would I make my friends hate me all football season long? Yup.

Football is great. It’s entertaining. It’s attention grabbing. There’s so much energy and brute vitality in the sport. That’s why I like football. But I’d be lying if I said I loved it. And the last thing I want is to hang out with my friends and talk about how much they love football. I can take a night of chilling and just talking about stats. But 17 weeks? Um…when does basketball season start again?!

Competitive sports (even if I’m not necessarily competing) usually bring out the worst in me. I am not even close to being a good sport. I’ll complain. Trash talk. Create alliances. Turn my back on friends. Scream. Cheat to win (not really…or maybe…). Laugh at another’s losses and undoubtedly crown myself king after one win. Ok so may be I’m not that bad. But I’d rather enjoy football for what it’s worth — an opportunity to chill and enjoying some good food.

But for all those who do decide to join a fantasy football league. Remember. It’s more than just a game. It’s life. I kid. I kid.