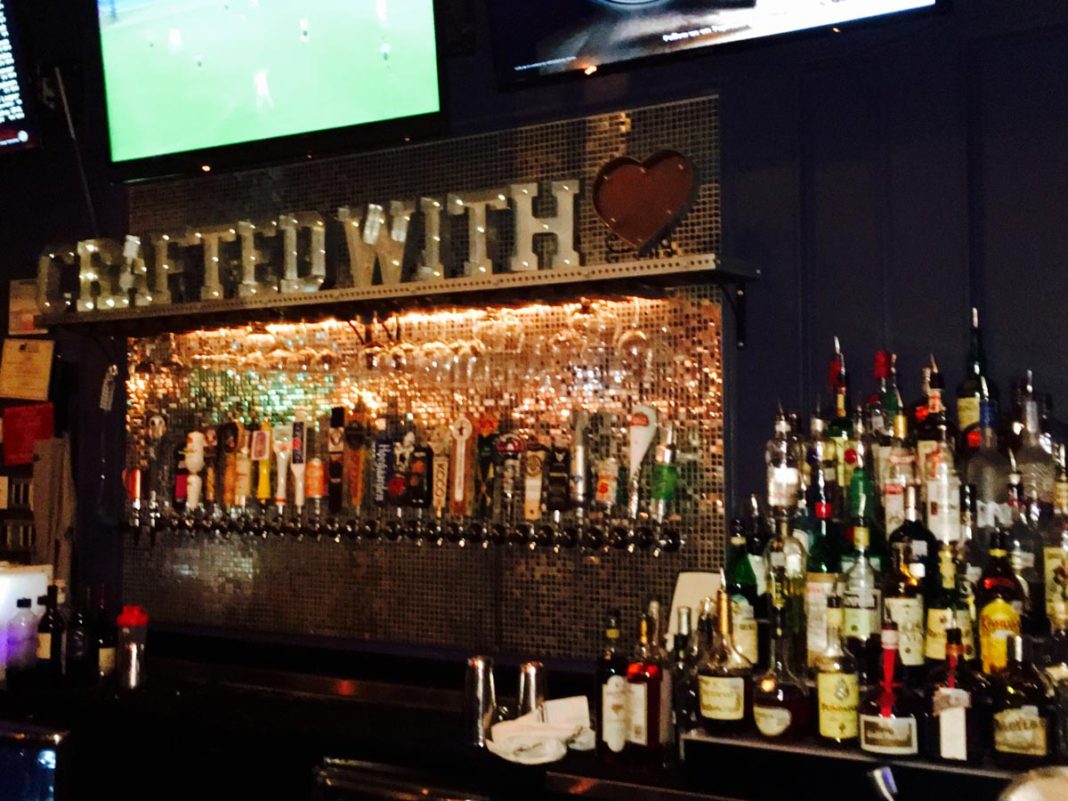 I have to say that in doing research for this series, it has been more than interesting. I have met some of the most talented individuals and have learned a lot about the craft of mixology.

I wish that I would have been able to visit more locations around the RGV to see what they all had to offer, but I haven’t exactly learned how to teleport yet. So it is with much happiness (and perhaps a bit of sadness) that I offer this last part of the series.

I give you two last establishments that you will hopefully agree are some of the best. 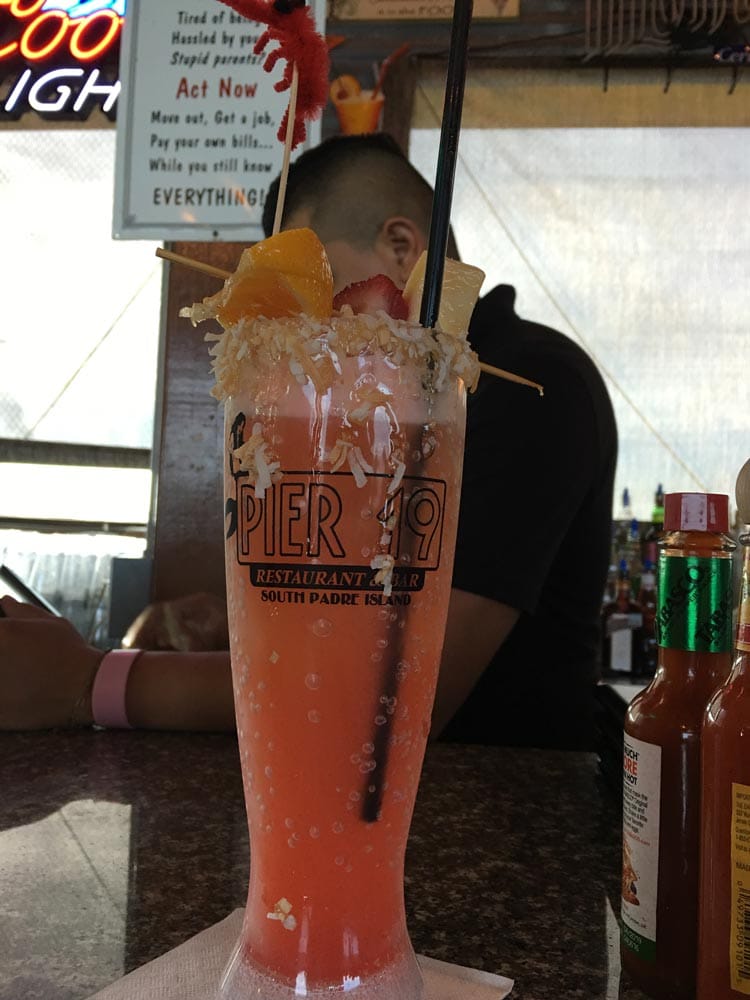 First of all, trying to find Pier 19 was a small adventure in itself. It was cozily tucked away toward the back of a KOA campsite. Once I entered the restaurant, I was really unsure as to what to expect. Part of the dining/bar area is a little hidden and so you have to walk outside to reach them. It came to my surprise that there were actually two bars, one indoor and the other at the end of the pier. I opted for the indoor bar since we all know what Texas weather is like during the summer. This particular day felt like being in a sauna.

I was promptly attended to by Ricky, the mixologist behind the bar, and asked him what their signature cocktails were. He showed me a list of drinks and mentioned that most on the menu were all fairly popular. He did recommend one called The Shark Bite, which I just could not turn down. This drink had a combination of Grey Goose Vodka, Malibu Rum, orange and pineapple juice, and was finished off with coconut flakes along the rim. I watched him as he scrupulously mixed all of the ingredients, shook it with a small force, and served it in a tall glass with the coconut and honey rim that I had mentioned. I couldn’t wait to taste The Shark Bite. After a long, hot day on the beach, this was exactly what I was looking for. I mean, doesn’t it just spell out tropical paradise? I took my first sip and it was beyond delicious. The flavors worked so well together and the coconut rim made it all come together. I was a happy girl. 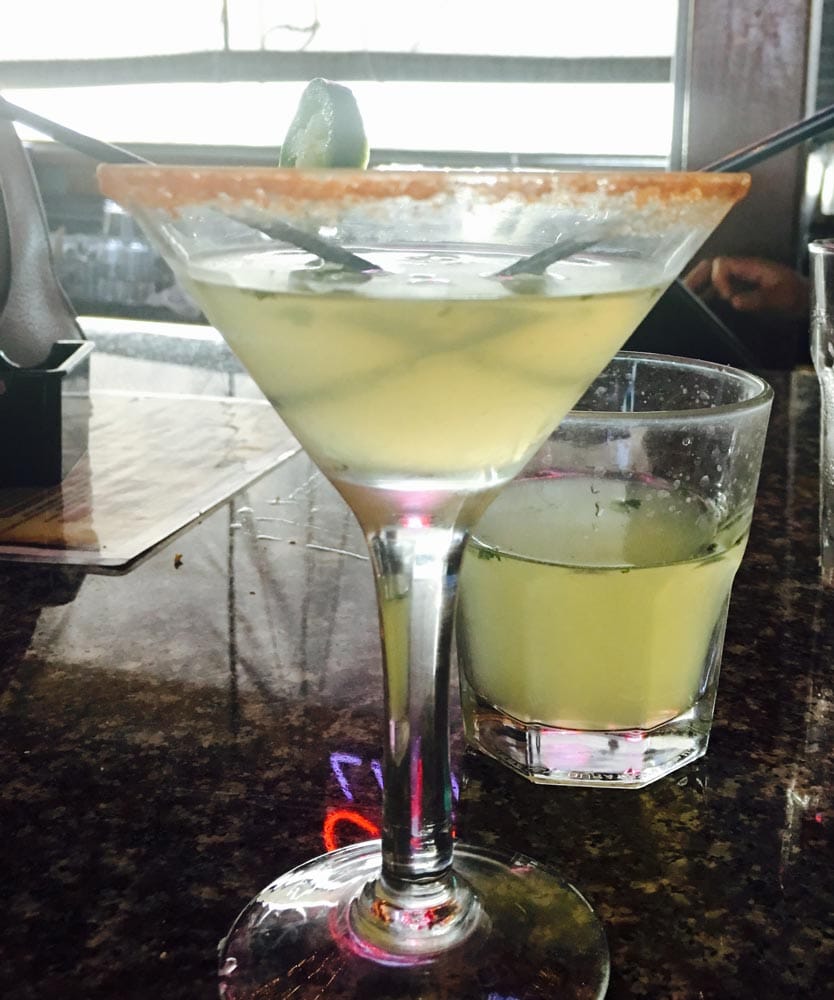 Since I know that being responsible is a MUST, I ordered a snack and waited some time before choosing my next one. I carefully looked over the menu and decided to try their Aye Caramba Mexican Martini. How fun does that sound? I was a bit skeptical since this drink had jalapeño listed as an ingredient, but I was feeling a bit daring. I had never tried such a drink. I mean, I am a tequila fan, so I thought why not. The Aye Caramba consisted of a flavorful combination of Z Tequila, Cointreau, sour mix, jalapeño, and agave lime juice.

While Ricky was preparing my drink, I asked him how these recipes had come about. He let me know that Johnny, the man who tends the bar in the back, came up with most of them. Job well done, Johnny.

The Aye Caramba was an interesting drink to say the least. I loved the flavors of agave, tequila, and Cointreau mixed together, and the jalapeño spice added the right burst of flavor. It wasn’t spicy, but had just the right amount of heat.

All in all, Pier 19 mixologists know what they are doing behind the bar. Their service is great, attitudes are friendly, and they are there to give you a great experience. 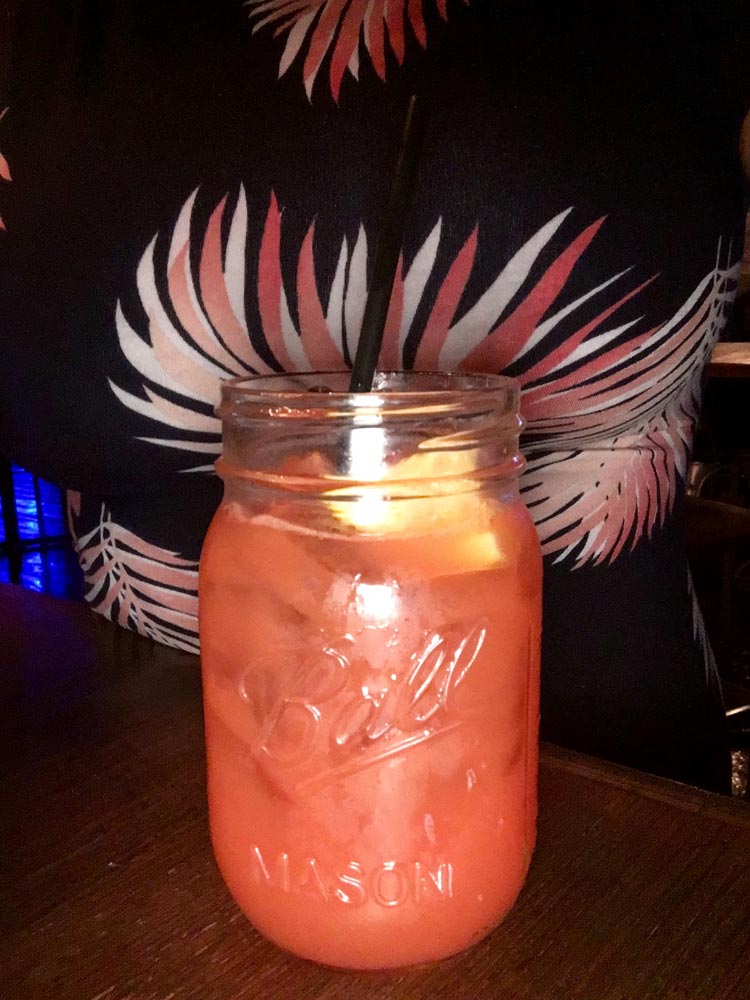 It had been a while since I had made a visit to The Quarter, so I decided to stop by and give it a try once again. Word is that they have a great selection of spirits and that the ingredients that they use are fresh and not to ordinary.

As I walked in, the atmosphere was lively, with a local band playing and conversations flowing. The bar area was full so my friends and I opted for a table. Our waitress immediately handed us our menus and I was instantly drawn to a favorite of mine, which I noticed had a clever twist added. It’s called Love is in the Air. This drink is a wild berry infused bourbon, which is made in house, mixed with brandy, honey, and lemon bitters. The others who were with me joined in on the fun and placed their orders which included the Xolo Salado and a couple of Moscow Mules.

I observed as Marcus, the mixologist, (and also General Manager) worked behind the bar preparing our drinks. He almost looked like a scientist using beaker like containers to create our spirits. It was quite a show and a bit hard to keep up with him, as he was moving behind that bar like a bolt of lightning. 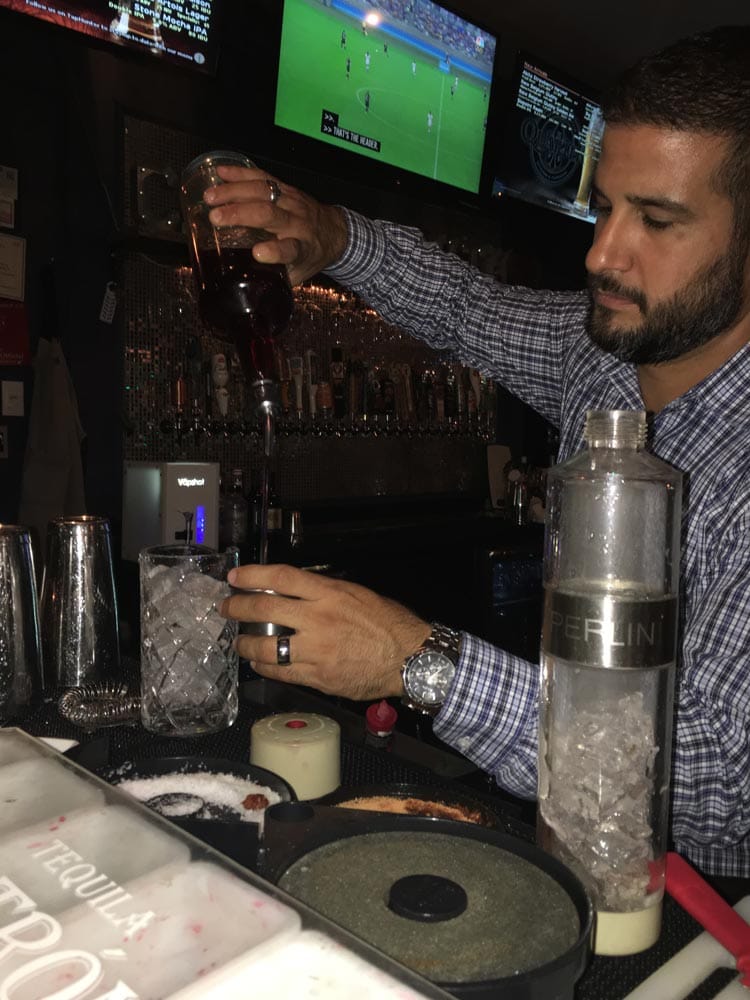 Our drinks were brought to the table and I went in for the first taste of my Love is in the Air. No wonder they gave this drink that name. I got weak in the knees and fell in love instantly. The combination of the ingredients was so well put together; the hint of honey and berries paired with bourbon and brandy made for one marvelous cocktail.

I asked to try the Xolo Salado my friend had ordered. I knew it had to be delicious because after he placed his drink down there was a vibrant smile on his face. Let me tell you, it was absolutely exquisite. This creation is a “Quarter Original” and is a mixture of vodka, orange liqueur, grapefruit, orange bitters, lime, and sugar. The flavors were light, refreshing, and made for the perfect drink.

Now, we all know that New Orleans is known for their signature Hurricane drinks, so I could not leave without trying one. The Quarter offers an array of flavors that include watermelon and strawberry, but I decided to go with the original that night. The Hurricane can be one of the strongest drinks around, since they include 2 types of rum along with 151, so I opted to share it amongst my friends. But i must admit, I almost wish I hadn’t. It was so incredible.

The RGV is one of the fastest developing areas in the country and we are undoubtedly keeping up with trends when it comes to craft cocktails. This is the end of the road for this series, but without question, just the beginning for this creative movement. To all the mixologist out there, thank you for being so passionate about your craft.

And always remember to Drink Responsibly, Call a Cab, Designate a Driver, and that Buzzed Driving is still Drunk Driving. Be safe out there. 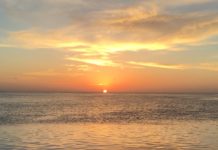 Daily Harvest, the vegan meal-delivery service that sells bowls, soups, and smoothies, is recalling one of its products after hundreds of people reported illnesses or adverse reactions, raising concerns about the need for more food regulation

✨Congratulations, Dr. Juliet V. Garcia!✨Garcia former longtime president of The University of Texas at Brownsville, will be presented with The Presidential Medal of Freedom, on Thurs., July 7, in Washington D.C. Read more: https://utrgv.news/DrJulietGarcia #UTRGV

Last month, the Greater McAllen Association of REALTORS published Mission’s Housing Report 📈, based on data gathered during May of this year. Check out these key figures for a quick glimpse inside Mission’s booming real estate market 🏘.

🏠 The US housing market went haywire over the past two years for a simple reason: There weren't enough homes to meet overwhelming demand.

But now one research firm is warning of a new threat looming on the horizon: too many houses. ⬇️

The Best Of RGV Mixology: Part I

Cari Olea -
The domain RGV.com is for sale (or lease) - Click here for more details:
This is default text for notification bar
Learn more