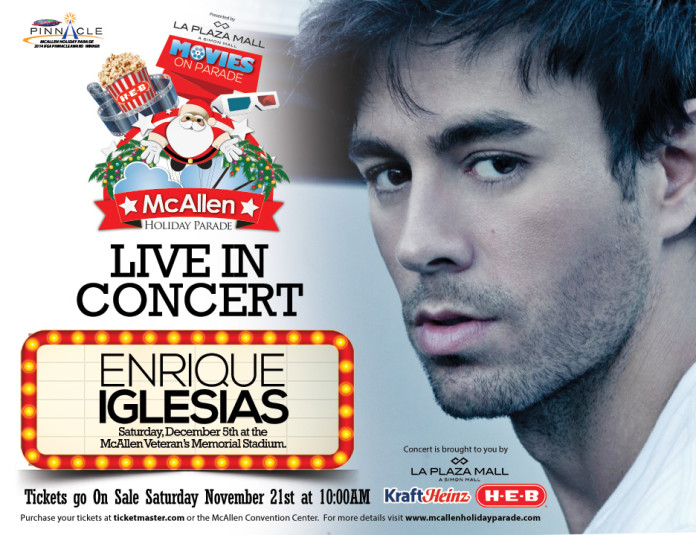 Image from: http://www.mcallenholidayparade.com
This year’s McAllen Holiday Parade will feature a major headliner to kickstart the event. City officials announced this week that Grammy Award winner Enrique Iglesias will headline this year’s parade with an hour-long performance to christen the floats.

The parade, which will take place on December 5th, will lead off with Iglesias’s performance at 5 PM followed by the parade, which starts at McAllen Veterans Memorial Stadium and marches down Bicentennial Boulevard.

Iglesias has the distinct honor of being the first artist to perform in the stadium, which just underwent massive renovations, in 20 years.

This year’s parade, which will be themed “Movies on Parade,” will feature 50 illuminated floats, 36 helium balloons and 15 marching bands. The route will begin at the stadium and head down Bicentennial Boulevard. General admission along the route is open to the public and will feature food vendors and restrooms. The parade will also be part of the two-day Christmas in the Park celebration, which will include a Tamale Fest and Candlelight Posada.

Seating prices in the stadium will range between $15 and $125, and will include special seats and access to the performance before the parade. Tickets will go on sale starting November 21st at the McAllen Convention Center and online at ticketmaster.com.

Audry Ocanas -
The domain RGV.comᵀᴹ is for sale (or lease)
Click here for details ➜
This is default text for notification bar
Learn more