The Downtown McAllen scene can be a little, let’s say intense, sometimes. The rows of nightclubs are great for what they are, but for a lot of people, the crowded dance floors and expensive drinks can get old after a while. On 17th street, home to some of McAllen’s most prominent clubs, a reprieve can be found on the far end of the street.

Tucked away near the end of 17th Street stands Yerberia Cultura, a laidback alternative to the intense club scene. In a way, “alternative” is the selling point as Cultura has quickly emerged as one of premier alternative music venues in the city.

Yerberia Cultura, which opened earlier this year, bills itself as a cultural space in Downtown McAllen. They make a huge effort to support and promote local artists and music acts with art showings and weekly shows. The bar is split into a cozy indoor bar area and a 350 cap outdoor area that also houses a stage for larger acts.

Just recently, they held their first sold out show when California garage rock act The Growlers played to a packed crowd of fans. As the bar grows, there are plans to bring down more well known acts, but the spirit of Cultura has and will always be local culture.

They pride themselves on featuring local acts and encourage local artists to display their talents through their venue.

A bar wouldn’t be a bar without drinks, of course, and Yerberia Cultura features some of the best drink deals in downtown. Whether you’re looking for a cheap Lone Star ($2 a can) or a variety of cocktails and specialty drinks, they can be found for relatively cheap. If you want to have fun without hurting your wallet, this is the place to be as there’s always a drink special going on, no matter the event.

They have also made an effort to provide a wide range of drinks for patrons to enjoy. New this week is Austin-based Austin Eastsiders Original Dry Cider.

Cultura is a unique place, especially downtown, and provides the kind of bar that you don’t see a lot of in McAllen; a good venue for alternative acts and a more laidback atmosphere that is nowhere near as oppressing as the nearby nightclubs. It’s the kind of place where you can make friends as a regular and feel at home, and sometimes all you need for a good night is to kick back with friends. 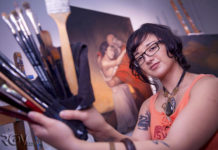