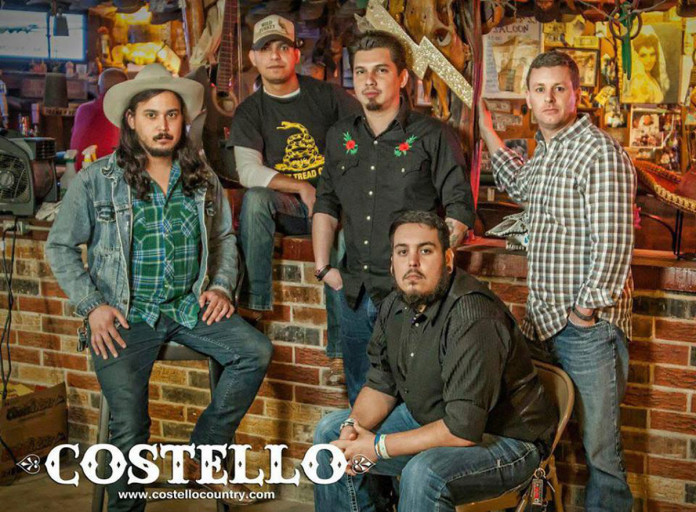 Finding good country music in Texas isn’t hard. After all, we are home to the “two-step” and some of the best country music ever recorded. It’s a little harder, though, to find it deep in the RGV. Sure, country plays on plenty of radios across the Valley, but there doesn’t seem to be a ground roots scene.

That’s where the band Costello steps in. This five-member group from McAllen has quickly made a name in the country scene with three recorded albums. They can even be found on streaming service Pandora.

The band consists of Max Moreno on lead vocals, Chad Taylor on keyboards and backup vocals, Denver Garcia on lead guitar, Dusty Salas on bass and Andy Gonzalez on drums.

The group has been around since 2013 and released their debut album, “Further Down The Line”, that July. They’ve released two more albums since, 2014’s “Songs About Her” and 2015’s “Costello Live.” They’ve been a staple on KTEX 100.3 FM since their formation and continue to produce tracks.

They’ve been successful because they hit that sweet spot between laid back and feel good that gets fans to dance. They have fun with their music and throw in some of that distinctive Valley charm that really makes them stand out from other acts.

Tracks like “Lucky Man” really capture that classic country spirit while the modern production gives it that edge and bite needed by any good country song.

Costello has used that charm to be successful on the road as well. They’ve toured with country legends Tobey Keith, Wynonna Judd and the Randy Rogers Band across the country, and have hit up some of the more iconic venues in the state.

All of this from a group of guys from a border town just playing what they’ve always enjoyed hearing. If you dig some down-home country with a little Valley twist, give Costello a try and ride off into the sunset feeling good.

Vroom! Vroom! 8 Killer Tips Millennials Should Know When Buying a...